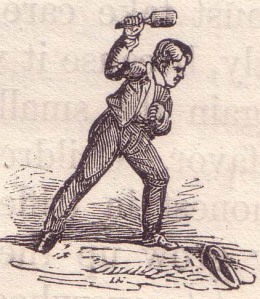 Unfortunately because of this lousy weather brought on by the storm I share a name with, I can not try out the new game I just got. Well, actually it is quite an old game. Trap Ball, I am told through various readings, was played as far back as the 14th century and into the 19th century. Mainly played in England, there is some evidence that it was played in colonial America but it may not have been as popular as it was in England. However, it does show up in some American publications as late as the 1890s. I have not seen evidence to suggest that it was played on the Southcoast of Massachusetts but that doesn’t mean that it can’t be played now, right?

Many publications note that it was a children’s game played by boys. From time to time it is suggested that it was played by adults such as in Games and Sports; Being an Appendix to “Manly Exercises” and “Exercises for Ladies” by Donald Walker published in London in 1837. In the dedication of the book, Walker states

In many of these Games, ladies may participate: most of them, they may witness and patronize. As not inconsistent, therefore, with female taste, I beg leave to inscibe them to you – in homage at once to Beauty and Intellect.

Walker does not say if Trap Ball was played by ladies. In Games For All Seasons by James Blackwood (London, 1858) which includes an entry for Trap Ball he states in the preface “In the present volume will be found descriptions of the principal games played by boys as well as girls…”

According to A Dictionary of Archaic and Provincial Words, Obsolete Phrases, Proverbs, and Ancient Customs, From the Fourteenth Century, Volume II (London, 1881) the game is defined as:

A game played with a trap, a ball, and a small bat. The trap is of wood, made like a slipper, with a hollow at the heel end for the ball, and kind of wooden spoon, moving on a pivot, in the bowl of which the ball is placed. By striking the end or handle of the spoon, the ball of course rises into the air, and the art of the game is to strike it as far as possible with the bat before it reaches the ground. The adversaries on the look-out, either by catching the ball, or by bowling it from the place where it falls, to hit the trap, take possession of the trap, bat, and ball, to try their own dexterity.

There is no base running in this game and it seems that a minimum of two people are need to play. Many players can be divided up in to teams, with the teams switching sides once everyone on one side has been put out. Or no teams are selected and instead a batting order is selected and individual tallies are kept.

Below is the Trap Ball set that I purchased minus the ball. The ball pictured came from Lemon Ball which is made to the specifications of the Massachusetts game of baseball. The Trap Ball set came with a smaller (about 2″) ball made of dark leather sewed in the figure 8 style. I’ll have to check my notes for descriptions of the actual ball used in Trap Ball. I am afraid that the ball that came with the set may get lost easliy due to its size. The Massachusetts ball may still be small enough to strike from the trap and not be easliy lost. Anything bigger would probably be difficult to elevate high enough from the trap to strike it. 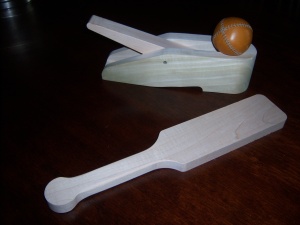 One thought on “Trap Ball”