I haven’t had much time to hit the research trails the past several months so I thought I would share some photographs I have collected over the years in hopes of finding more information about them.

The two below are images of New Bedford Post 1 American Legion baseball team. I am guessing the photographs were taken circa 1950. 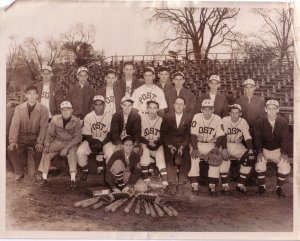 Cursory searches online did not identify much about the history of New Bedford Post 1. The American Legion baseball program was founded in 1925 in South Dakota. In 1926, the first season began with teams in 15 states taking the field. It isn’t clear how many teams there were in that inaugural season or which states fielded teams according to the American Legion website. But it does indicate that currently there are over 5,400 teams covering all 50 states, Canada and Puerto Rico. Among the many alumni of American Legion ball are Ted Williams and Carl Yastrzemski.

Any suggestions as to the identification of the individuals in the photos or the year they were taken?